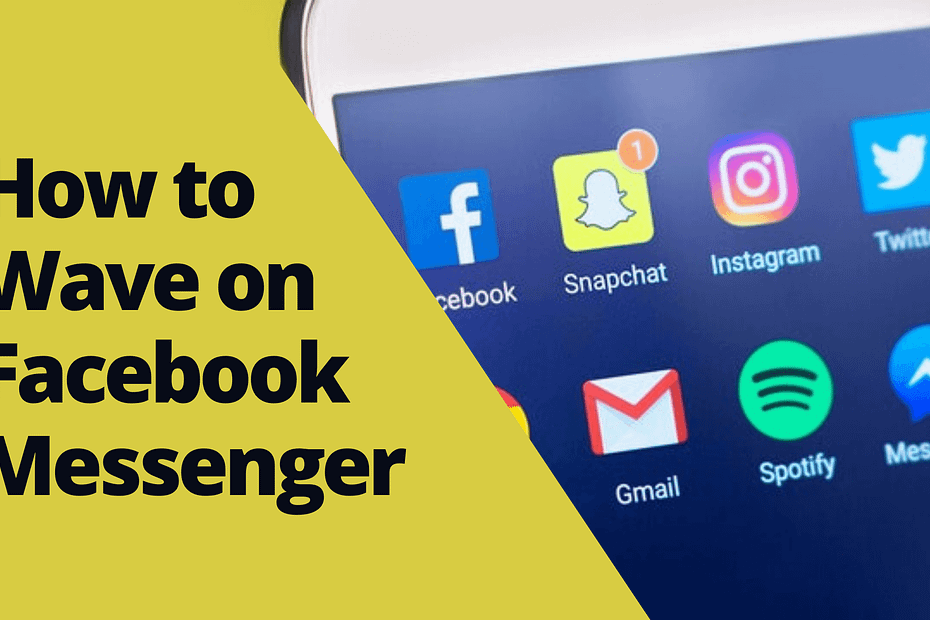 The Facebook Messenger app is the perfect companion app for Facebook and an absolute must-have for avid Facebook users. It allows users to communicate with anyone from their friend’s list, be it a simple “hello” text or a video call spanning multiple hours. It is used every-day by hundreds of millions of people around the world. Over the years, it has been frequently updated and integrated with stickers, animated gifs, filters, and emoji. The Messenger App, as of today, boasts an impressive arsenal of simple keyboard emoji, custom downloadable emoji, and stickers. The ability for one to express themselves has been elevated to a whole new level, and thanks to the team behind Facebook, it is an ever-evolving field in technology. One such emoji is the Facebook Messenger Wave. Here we’ll see ‘How to wave on Facebook Messenger?”

Why should you go with the Facebook Wave Emoji?

One of the multiple features on the Messenger app is the Facebook Messenger wave: a simple yellow wave emoji that not only emulates a friendly and welcoming wave but it is the ultimate conversation starter. It is absolutely versatile in its potential uses. Think about it! It can serve as the perfect way to break the ice with someone you just added on Facebook or a stress-free way to rekindle a discontinued conversation. Let’s see how you can send a wave on the Facebook Messenger App.

How to send a simple wave on Messenger?

Sending a simple wave on either Facebook Messenger or Facebook.com is simple. You need to tap on the emoji icon on the chat and simply select the Facebook Wave emoji. 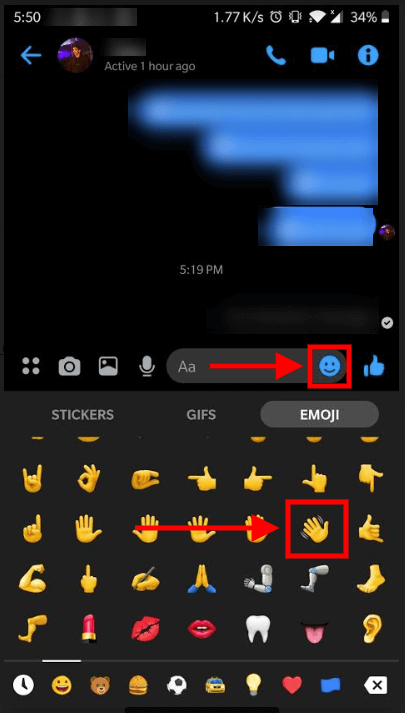 Once you tap on the Wave emoji, it will be sent to your contact. Then you can simply sit back and let the conversation flow. However, if you like using the Wave emoji and want to use it repeatedly without going over the fuss of selecting it over and over again, there is good news! You can continue reading on to learn how to set the wave emoji as your favorite emoji indefinitely.

How to set the wave emoji on the Messenger App?

Over the course of Messenger’s inception in the app-scape of both android and apple products, the way to wave has changed quite a lot. Before, one could wave before initiating the conversation with a newly added Facebook friend. It served as a quick and elegant way to break the ice and get the conversation cracking. Recently, this format has undergone a change, and now the option to send a single Messenger Wave text message no longer exists. Instead, a Facebook “like” emoji is located right beside the text box.

Fear not! We can change this configuration and have the wave emoji right back where it can be conveniently used by you. 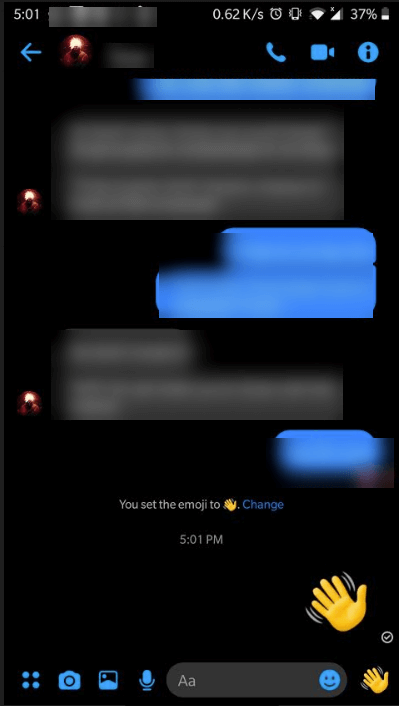 Let’s take a step by step approach towards sending one of your friends a friendly wave text message on the Messenger app.

The first step is really easy and it can be done almost in a jiffy! You simply just need to open the Messenger app on your preferred device, be it a mobile phone or tablet. Just like Facebook, it’s absolutely free to download and use. If you don’t have it already, just go to the Google Play or Apple store and download it. You can either just search for it, or even lookup the Top 100 charts for apps as it is an extremely popular app and it’s being downloaded all the time. 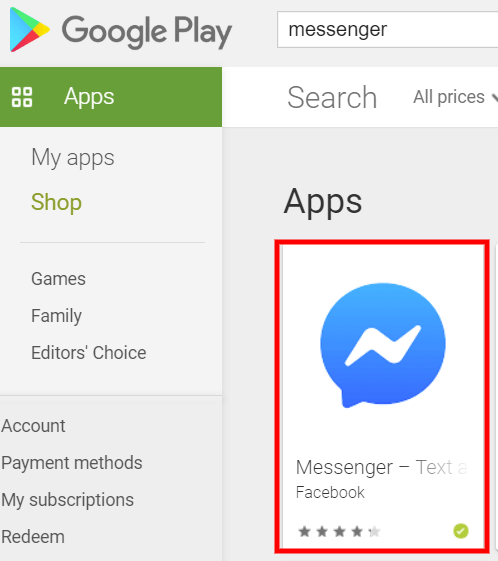 Hang on! You’re almost there. By default, the Messenger app has a “like” emoji right beside the text box. We need to get the wave emoji so we’ll need to change the default configuration. It sounds really techy but it’s quite straight forward. You can check your freshly installed Messenger app to confirm that you have the “like” emoji. 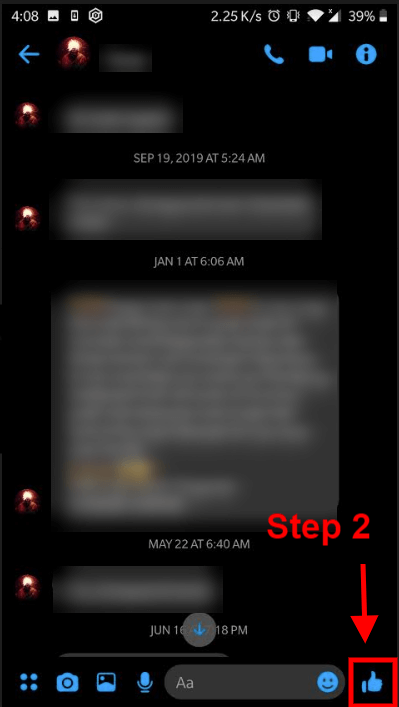 Now to change the like emoji, you simply need to head over to the information panel of the specific contact that you want to send the wave to and tap on the “Emoji” tab. 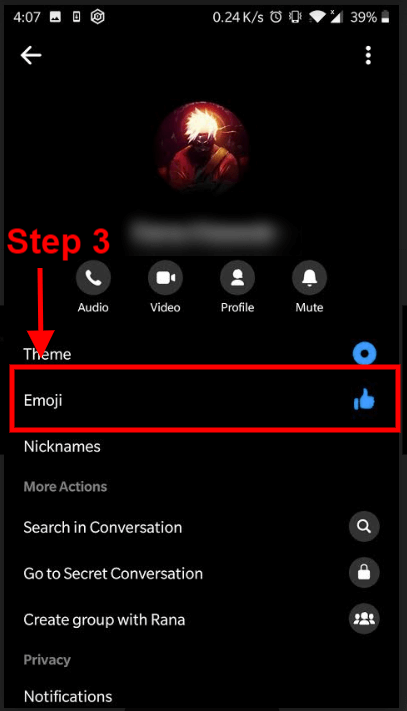 Once you have tapped on the emoji tab, a small panel should pop up. It offers a range of emoji that you can choose from. Any chosen emoji will appear right next to the text-box. Simply tap on the “Wave” emoji to choose it. 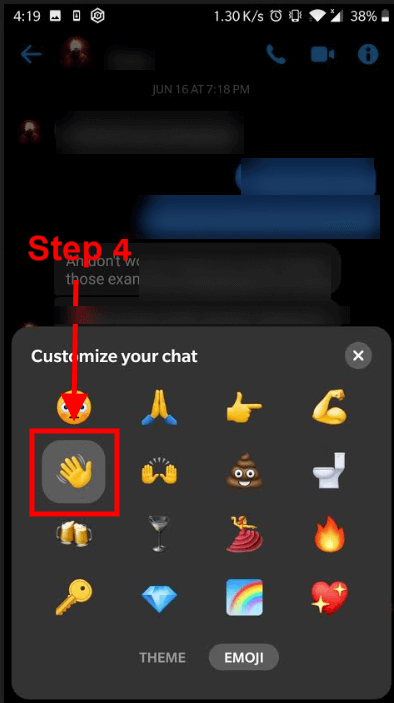 Finally, you have the Facebook Wave emoji right next to your text box! Now, you can simply tap on the emoji to send it as a single text message to your friend or you can just hold and tap the emoji to watch it scale in size. Once you let go, a larger and prominent Wave emoji will be sent instead of the standard smaller one. 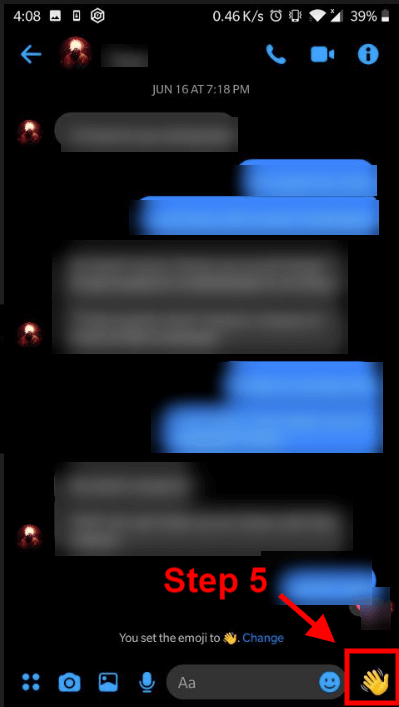 If you followed this procedure closely, a wave emoji should be located right next to the text box of your specific contact. An important note though: Facebook like emoji is still the default emoji option for the rest of your contacts on the Messenger app. To set the wave emoji for every contact, you will need to do it manually for each contact. As you probably found out from reading this article, it doesn’t take very long before you’re sending Wave emoji to your contacts on the Facebook friends list.

Oops! I accidentally sent a wave to someone! How to delete a Facebook Messenger Wave?

Worry not! Accidentally sending an emoji to someone happens all the time! Deleting an accidental wave is almost as simple as sending one. Simply, tap and hold on the wave emoji message. The app then asks if you want to delete it for everyone or just for yourself. Now, if the message was not delivered to your friend before you deleted it, it will not be displayed for them. However, if it has been delivered and seen by them, then it can be deleted only for you.

Hopefully, this article was helpful in teaching you how to send the Facebook “wave” emoji and also set it as your favorite emoji instead of the default “like” emoji.